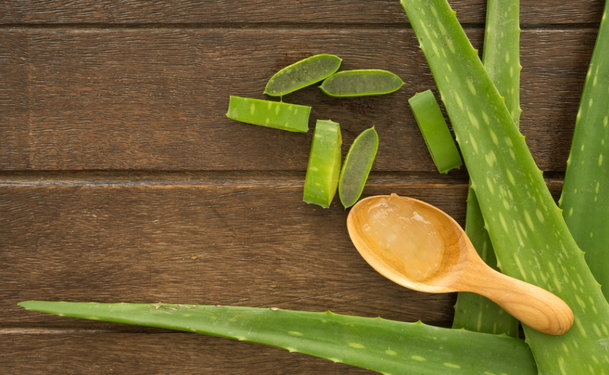 How to Use Aloe Vera to Get Rid of Age Spots

Aloe vera, commonly used for a variety of skin and complexion problems, is also recommended for age spots. These are brown or yellow-colored marks that appear on the face, neck and backs of the hands, normally when you have passed the age of 40. They have been found to be harmless, but are annoying to most people since they are an indicator of age.

The portions of the body that are exposed most often to the sun are the places where age spots appear. Women in particular have them appear frequently on the upper breast, arm and back areas. They can be caused from wearing clothing with scooped necklines, straps/no straps, backless dresses, etc.

Another possible cause of age spots is the liver. The liver, which cleanses the system, becomes filled with toxins it is unable to absorb and dispose of, causing them to be directed elsewhere. If this is the cause of the spots on your skin, they will remain there until the underlying cause is diagnosed and treated accordingly.

A third and less frequent cause of age spots is nutritional deficiency. Like the toxin buildup, this requires a physician or nutritionist's aid.

A simple inexpensive treatment, aloe juice can be applied directly on these spots twice per day; leave it on the skin for at least 45 minutes at a time. Direct application of the liquid straight from the plant to the skin sloughs away dead skin cells and promotes growth of healthy new cells. You may mix the aloe vera liquid with lemon juice and glycerin to make your own gel. The lemon juice acts as another fading agent.

There are various over-the-counter medications and prescription preparations for age spots, but the aloe vera has one large advantage over these. A natural remedy, the plant contains no ingredients which will be harmful to your skin or internal organs when used over a long period of time.

An additional benefit is that the plant's sticky-feeling juice will firm and tone the skin while evening out the overall appearance of your complexion.

Results do not happen overnight when using aloe, however. The buildup of the excess pigmentation within the body takes a long time to develop, and it takes an equally long period of time to remove it as well. Reportedly, with daily use, improvement should begin to appear following around two months of treatment.

Be wary of the numerous gels advertised and sold as a health benefit; most contain very little genuine aloe. Wild aloe gel can be used directly from an aloe plant or it can be purchased from a health food store.