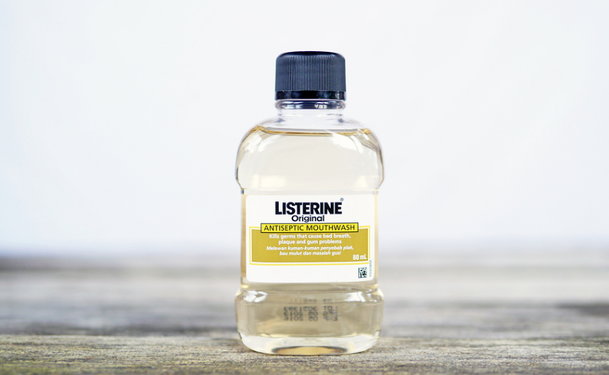 Among other athlete's foot remedies, there are a few unconventional solutions such as Listerine or vinegar. As a matter of fact, even if Listerine has been created for dental plaque and everyday oral hygiene, its compounds can reduce the fungal infection, as Listerine has antiseptic effects.

Athlete’s foot is an infection that appears on the feet and is facilitated by moist environments such as sweaty socks. The infection is caused by fungi and is also known as the ringworm infection or the tinea pedis. The infection will cause blisters, skin flaking and extreme itchiness.

The infection is contagious and may be easily caught from public spaces such as swimming pools or gyms. The fungi, known as Trichophyton, thrive in wet environments such as sweaty socks or shoes. Consequently, the infection will affect the feet and the blisters will be mostly present between the toes or on the heels.

Listerine is a mouthwash that can be used to prevent the occurrence of plaque and keep the breath fresh. However, the compounds of Listerine can also be effective in eliminating the fungi that cause the Athlete’s foot.

Listerine contains ingredients such as:

How to Use Listerine for Athlete’s Foot

Alternatively, the feet can be soaked in water which should contain 100 ml Listerine (but this can be a pricey treatment, as the baths should be applied twice per day). Listerine may also be mixed with vinegar, which contains acetic acid and can also fight the fungi. The vinegar can be mixed in the water the feet are soaked in, in the same amounts as Listerine.

Effectiveness of Listerine for Fungal Infections

Listerine has been proven to fight gingivitis and plaque, but it hasn’t been certified as a solution for athlete’s foot. However, if used externally, the compound cannot harm the infection and may eliminate the fungi and the skin itchiness.

Listerine can cause skin irritation, so if this happens, it’s best to discontinue the treatment and consult a dermatologist. The solution shouldn’t be applied if there are open wounds.

Other Solutions for Athlete’s Foot

The athlete’s foot infection can be treated with various antifungal creams that may be purchased over the counter. It is also important to keep the feet dry by using sprays and powders and change the socks more often.