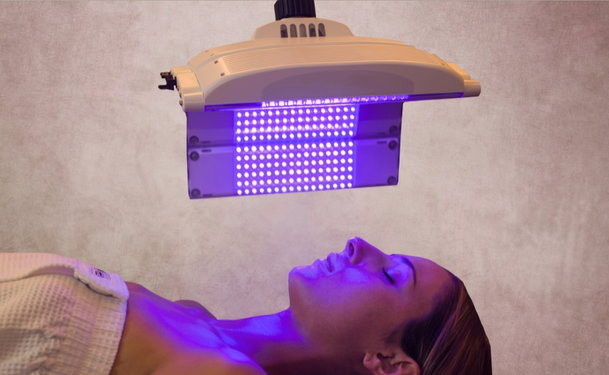 What to Expect during Photodynamic Therapy

During a photodynamic therapy procedure, a photosensitizing drug is administrated onto your skin or into your bloodstream. After incubation, the drug is activated with a specific wavelength of light. The activation of the drug produces an oxygen molecule that will react with nearby cells and kill them.

For a skin procedure, the skin area you will have treated will be cleaned to remove any oil and dirt. Some patients may also receive a microdermabrasion. The photosensitizing drug will be administered to the skin in the form of a cream or a liquid. The drug is allowed to dry and then incubated anywhere from 30 to 60 minutes. Some areas might require a longer incubation time. During the incubation, you can be taken to another room or even released to home, depending on the time. After the incubation time is over, you will be moved to a light-room, where the drug is activated. You might feel a warm and tingling sensation during the activation. After the light activation is complete, the area of skin will be washed off and sunscreen will be applied.

For a treatment of cancer of the esophagus or lung, the photosensitizing drug will be administrated into your bloodstream. The incubation time in this case is usually from 24 to 72 hours. After the incubation time, you will be treated with the light. This will happen in an operating room under a general anesthesia. After the treatment, you will have some time to recover from the procedure and the anesthesia. Photodynamic therapy is usually an outpatient procedure, and thus, you will get to go home the same day.