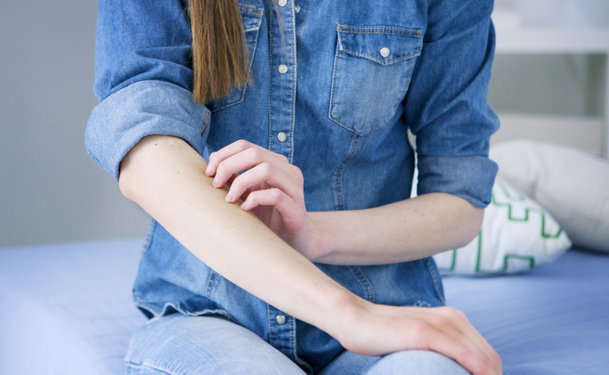 Psoriasis is a skin condition that causes a dry, scaly appearance of the skin. It is a fairly common condition, and its unusual appearance of the skin often gives people the impression that it is contagious; however, this is simply not the case. In order to understand what can be done to treat psoriasis, it is important to learn more about the condition and how it develops.

Psoriasis occurs as the result of excessive cell reproduction. When cells of the outer layer of skin begin reproducing, the appearance of dry, scaly, flaky patches becomes obvious. Depending on the severity of psoriasis, some patients may have full-body coverage, whereas others may only be affected on the scalp or kneecaps.

Although medical science has been unable to determine exactly what causes psoriasis to develop, it is thought that genetics and overstimulation of the immune system may be two of the greatest contributing factors to its development. The important thing to remember about psoriasis is that it occurs because of rapid cell reproduction, and that is where treatment will be aimed.

Depending on the exact trigger, psoriasis can start off as hardly noticeable or as an overnight attack of the skin. Some patients affected by psoriasis are so minimally affected that they do not even know they have the condition. Other patients seem to be affected on all major surfaces of the skin and repeatedly seek medical treatment looking for relief. Some of the signs of psoriasis include:

Some patients have also stated that the psoriatic lesions of the skin are itchy and cause excessive amounts of scratching. Scratching can, unfortunately, make the lesions worse and cause them to reproduce, which is one of the reasons why medical treatment is so important for patients suffering from psoriasis.

Medical data has shown that approximately 8 million people are currently afflicted by psoriasis, with a higher prevalence occurring in African Americans. Psoriasis is most commonly diagnosed in the adult years, although infants and children can be born with the condition or they can develop it as they age. Although the medical community has been unable to identify the true cause of psoriasis, it generally tends to occur over time with the dry, scaly patches starting off small and then spreading to other areas of the body. In fact, when the onset of psoriasis becomes noticeable, most patients tend to mistake it for a bad case of dry skin.

Psoriasis cannot be cured, largely in part because the exact medical cause cannot be identified. However, the symptoms can often be successfully controlled. Steroidal creams and lotions are usually the first method of treatment tried. These lotions can help reduce inflammation and control the redness and scaling of the skin. When the skin is severely covered by psoriatic lesions, oral steroidal medications may be given to help control the symptoms of psoriasis.