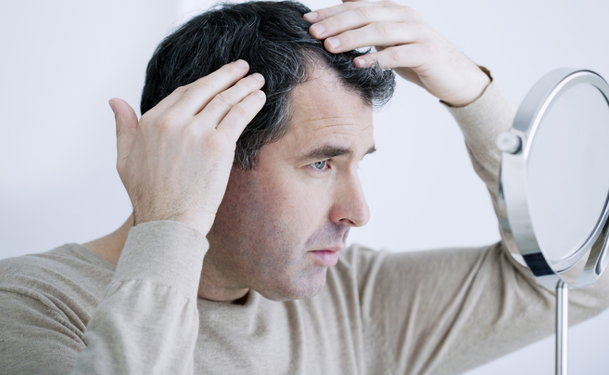 The Hamilton Norwood scale is the most accurate means to classify male hair loss. The scale was developed by Doctor James Hamilton in the early 1950s and was improved by Dr. Norwood in 1970s. The scale contains seven types of male baldness and can help doctors diagnose the hair loss.

The type I hair loss is a mild condition with minimal hair loss. Often, this stage of hair loss is ignored as it is not noticed by most patients. The hair starts thinning in the area of the temples.

The type II hair loss in men designates minimal hair loss, but it is more recognizable. Typically, it is at this stage that patients start to acknowledge that there may be a problem. The hairline may recede in the areas around the temples.

Type III hair loss in men is considered more serious and at this stage, the patient may require treatment. The receding hairline can be observed at the temples and the hair will be thinning on the rest of the head also.

The type III hair loss may also be present only in the vertex area, and in this case, there will be only a minimal receding hair line at the temples.

The type V hair loss in men will involve a bald vertex area and no hair in the front-temporal area. But, there will be a band between these 2 bald areas. However, this is similar to the type IV, but the band separating the 2 bald areas will be much thinner and the hair in this area will be very thin.

In the 6th type of male hair loss, the band separating the vertex and the front-temporal baldness will no longer be visible. The patient will have a large bald area starting from the forehead to the back of the head. There will be a band of hair at the back of the head.

The last type of hair loss is the most severe type of alopecia in men. The band of hair remaining will be narrow, and the hair quality is typically weak. The band may remain, but the hair may also fall out.