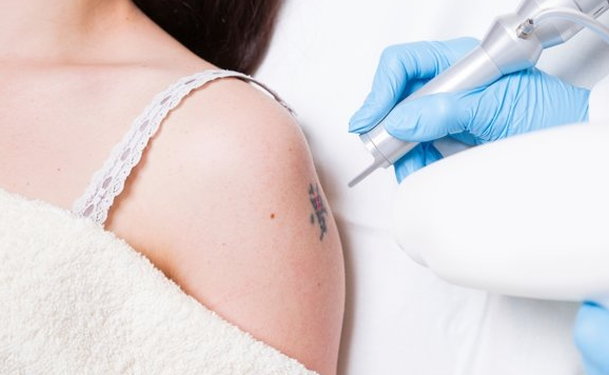 How Laser Tattoo Removal Is Performed

Laser tattoo removal is done to obliterate a decorative tattoo, an indelible ink marking in the dermis layer of the skin. The tattoo craze has grown significantly over the past decade, with more than 10 million Americans having a tattoo. More than 50 percent of people later regret their decision to have one and want it removed. Laser tattoo removal has become the most precise and effective method of removal. There are minimal side effects.

Lasers work to disturb the ink by sending rapid pulses of concentrated light beams directly at the tattoo. There are 10 to 30 pulses of laser delivered per treatment session. The resulting miniscule ink fragments are displaced in the area of the tattoo and are slowly reabsorbed by the body's immune system. Protective eye shields must be worn by the patient to protect the eyes from the laser. The procedure is bloodless and requires no incision. The laser pinpoints the ink of the tattoo but does not damage the surrounding layers of skin. The deeper the ink penetration of the tattoo, the more likely it is that the heat of the laser will cause mild pain or blistering.

Once completed, the area will be treated with an antibiotic ointment and covered with a dressing. It should be kept clean and dry between showers. The site might form a scab which will protect the area and eventually wither away.

There are different width and wavelength lasers used to destroy the various colors of ink. The easiest ink color to remove is black because it absorbs the full spectrum of light from all laser wavelengths. Red ink selectively absorbs green laser light, so it's not as easy to remove. Green and blue ink can only be treated by selected lasers based upon the pigment color and require more laser pulses.

Each session only takes a few minutes, but the full removal process takes several of these sessions, over the course of four to eight weeks. Three-week intervals are required between sessions to allow pigment fragments to be absorbed by the body. Each session goes deeper into the layers of skin, removing more ink and slowly lightening the tattoo.

Patients describe the discomfort during the procedure as mild. The sensation has been compared to a lightly stretched elastic being snapped against the skin, a mild sunburn or being splattered with hot specks of bacon grease. Some doctors recommend taking a non-aspirin pain medication such as Tylenol before each session to control minor discomfort. Sometimes, a topical anesthetic cream is applied about two hours before the laser procedure. A local anesthetic can be injected into the tattoo just before the session begins, but most patients report that they do not need much pain control.

Not all tattoos can be completely removed, and a shadow often remains. Tattoos are meant to be permanent and the advances in ink production over the past decade have made them even more difficult to remove. The treated tattoo fades as the area heals. The entire healing process usually takes one to two months.