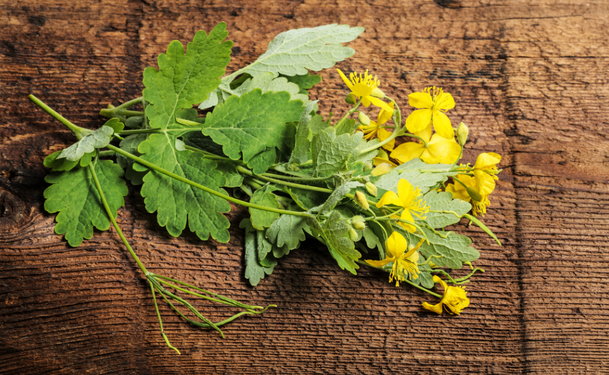 Warts are essentially a viral infection caused by HPV or the Human Papillomavirus. Contemporary medicine provides little options in terms of treating warts in a comprehensive manner. Most of these wart-removal methods involve a microsurgery wherein the wart is excised, and the use of strong, steroidal creams can induce a contradictory reaction on the skin. However, alternative medicine provides holistic treatment options in the form of herbal and homeopathic treatment for warts.

Chelidonium majus is also called Greater Celandine or the Swallow Wort. It is also referred to as the Garden Celandine and Felonwort. Within the herbal niche of wart treatments, Chelidonium majus is perhaps the most commonly recommended herbal ingredient. The use of Chelidonium majus for treating warts is indicated in Indian and Chinese herbal medicine. It is being increasingly retailed as a wart-removal remedy in herbal pharmacies across the world.

Chelidonium majus is quite effective in reducing the size of moles, if not completely removing them. Herbal preparations marketed as ‘Wart Mole Vanish’ contain a high concentration of Chelidonium majus. This plant is commonly regarded as more effective in treating warts than other herbal remedies with a similar reputation like Bloodroot.

The juice/extract of Chelidonium majus is used for treating a variety of skin problems. This includes chronic, malignant disorders and corns apart from warts. It is also used for the treatment of skin suffering from a herpes infection. Chelidonium majus has appreciable tissue rejuvenating properties, and this is why it is also used in the treatment of cataract and blind spots on the cornea of eye. The juice of Chelidonium majus has anti-bacterial/anti-fungal effect and thus, it is used as a remedy for stopping excessive bleeding.

The effectivity of Celandine is largely due to the naturally-occurring, potent biological compounds found in it. This includes sanguinarine, protopine, chelidonine and chelerythrine apart from proteolytic enzymes. The enzymes are able to slowly dissolve away the cellular-level adhesions found in skin tags or warts. These active ingredients are capable of arresting cellular development when applied at a particular site. When Chelidonium extract is applied on the wart, it is able to inhibit the cellular development processes like mitosis within the wart, slowly neutralizing the multiplication of the HPV. These compounds are often referred to as alkaloids and have established anti-tussive properties.

Homeopaths prescribe medicines from a large range of homeopathic compounds based upon the kind of wart present and the overall, bodily constitution of the patient. The initial results with homeopathic treatment might be a bit slow, but this holistic treatment is aimed at treating warts comprehensively and not just curbing them. Some commonly used homeopathic medications for treating warts include:

Cost of Warts Treatment
What Is a Periungual Wart?
What are Warts?