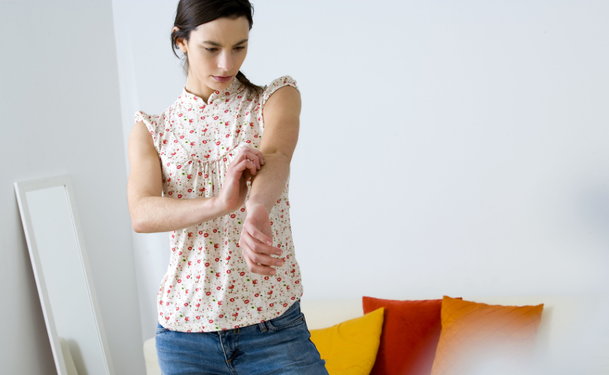 Scabies, also known as human itch mites, are microscopic parasites that affect people from all social classes around the world. Though they're invisible to the naked eye, scabies cause intense discomfort when they burrow under the skin to lay their eggs. Scabies mites secrete a substance that irritates the human host's skin and causes severe itching and a bumpy rash. Scabies are easily transmitted from one person to another and cannot survive without a host for more than 72 hours.

Human scabies, or Sarcoptes scabiei var. hominis, belong to the Arthropod class. As they tunnel under the top layer of the skin, female scabies mites leave small, raised burrows where they lay their eggs. These tiny serpentine lines combine to form an itchy, red rash that resembles clusters of tiny pimples. Once the eggs have hatched, the larvae dig burrows of their own, where they remain for several days until they advance to the next stage of their life cycle and become nymphs. Nymphs mature into adult mites capable of mating and continuing the reproductive cycle. Females lay two to three eggs per day. Scabies mites may live for up to a month on a human host.

Scabies mites can be transmitted through direct physical contact or by sharing clothing, towels, bedding or other personal items. Because scabies often infest the groin area, they may be transmitted during sexual activity. Scabies infestations are most common among people who share a home or in densely populated facilities, such as hospitals or nursing homes.

Scabies is most often diagnosed by the appearance of an intensely itchy, pimply rash between the fingers, on the folds of the wrists, on the shoulder blades, behind the knees or in the groin area. Topical creams or oral medications may be prescribed by a health-care provider to treat scabies.