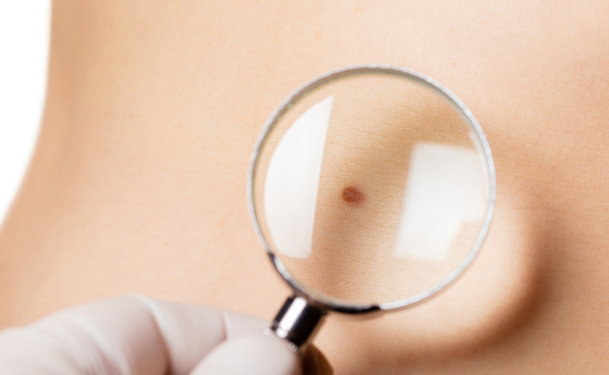 Melanoma is a serious form of skin cancer that may be caused by exposure to the sun's ultraviolet light. Certain factors such as having fair skin, blonde or red hair and blue or green eyes may increase your risk of melanoma. A family history of the disease and other risk factors may also contribute. Recognizing signs and symptoms associated with melanoma is important in identifying the disease at its early stages when treatment may be more successful.

If you notice new growths, changes in existing growths, sores that do not heal, moles that bleed or dark skin not caused by the sun, seek immediate consultation with a licensed physician, as these may be signs of melanoma.

Melanoma may appear in existing moles or other skin growths, although they may also appear on otherwise normal and healthy looking skin. It is important to be aware of any new skin growths or changes to existing growths. When in doubt, always consult a licensed physician.

Melanomas often appear as dark, flat moles on the skin. They may have several different colors or hues of color in the one lesion. Many melanomas are asymmetrical, meaning they do not appear identical from one half to the other. They are usually thought to have irregular borders, although this is not always the case. If you notice any of these characteristics of a mole or other skin growth, seek immediate medical consultation.

However, melanomas may appear in one uniform color and with a normal border as well. They may appear symmetrical and have two halves that appear perfectly alike as well. Because there is no one rule for identifying melanoma, patients are encouraged to seek consultation with a physician if they notice any new growth, change to an existing growth or any of the above mentioned signs and symptoms of melanoma.

Other possible symptoms of abnormal moles to look out for include itchiness, scaling, becoming harder, becoming lumpy, other changes in texture, oozing and the spread of pigment from the mole to the skin around the mole.

To learn more about melanoma and possible symptoms of the disease, talk to a licensed physician.

The Risks, Signs, and Treatments for Melanoma
Myths and Facts About Melanoma
Risk Factors for Developing Melanoma