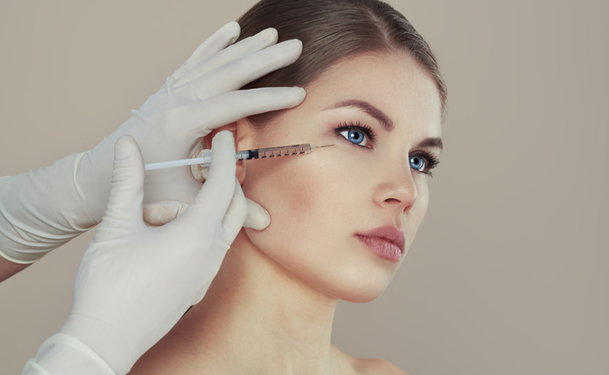 BOTOX® is the pharmaceutical brand name for botulinum toxin, a protein derived from the bacterium Clostridium botulinum. In sufficient amounts, botulinum toxin causes a potentially deadly paralytic condition known as botulism, which is usually contracted by consuming preserved or canned foodstuffs that have been improperly prepared or stored. However, in small doses, botulinum toxin, as BOTOX® is used in a number of medical and cosmetic procedures.

How does BOTOX® work?

Glabellar lines, the lines that appear between the eyebrows known as "frown lines," are the result of contraction of the muscles in the face. BOTOX® essentially partially paralyzes the muscles beneath the frown lines by blocking the transmission of nerve impulses. This reduction in muscle activity means means fewer and less pronounced muscle contractions and results in the smoothing out of formerly persistent frown lines.

What areas of the body does BOTOX® treat?

As a cosmetic application, BOTOX® is most commonly used to decrease the appearance of deep lines in the skin of the face, particularly frown lines that form between the eyebrows. However, BOTOX® preparations are also used to treat excessive underarm sweating, the neck pain and muscle spasms that accompany cervical dystonia, dysfunctions of the eye muscles such as strabismus, and the syndrome of eyelid spasms known as blepharospasm.

What are the advantages of BOTOX® over other similar treatments?

BOTOX® is a non-surgical, out patient treatment which requires no recovery time and no disruption of work or other activities. It is also a very time-efficient procedure, often taking less than ten minutes to complete. In clinical trials, ninety percent of those treated with BOTOX® for deep lines in the face reported a significant improvement in their appearance that lasted for up to four months. Because Botox® is one of the most frequently performed cosmetic procedures, it is easy to find a well-qualified and highly experienced health professional to administer the treatments.

Who is a candidate for BOTOX® ?

The best candidate for BOTOX® injections for facial lines is an adult between the ages of 35 and 65 who has begun to notice the formation of moderate to deep lines on the forehead between the eyebrows. Those who undergo BOTOX®injections for cosmetic purposes should be physically and psychologically healthy and have realistic expectations concerning the effects of the procedure upon their appearance. Individuals who have a medical history that involves swallowing problems or who are afflicted with certain neuromuscular disorders, including myasthenia gravis, Lou Gehrig's Disease, and Lambert-Eaton syndrome should share this information with their doctor because of an increased risk of severe side effects. Individuals with these conditions may need to be carefully monitored following the Botox® injections, and, in some cases, the procedure may be contraindicated all together.

How is BOTOX® performed?

The procedure is generally performed in a doctor's office or skin care facility. Prior to the procedure the doctor will identify the best injection sites by observing the movement of the patient's facial muscles. Although no anesthesia is required, the doctor may numb the treatment area with a local anesthetic. Using a tiny needle, the doctor will administer a number of injections directly into the muscles beneath the frown lines or other deep lines that have been isolated for treatment. The procedure generally takes no more than ten minutes.

Because the procedure requires no incisions and no administration of general anesthesia, there is little or no recovery time required following a BOTOX® treatment. Most people continue their normal activities without interruption following the procedure. For a day or two following BOTOX® injections, patients are likely to experience a number of mild side-effects, including temporary eyelid droop and mild nausea, as well as mild discomfort, tenderness, redness or swelling at the injection sites.

Patients generally notice a marked decrease in their frown lines within a few days to a week of the procedure. The improvement can last up to four months. Although the muscles beneath the frown lines are paralyzed, an individual who has undergone Botox injections can still raise his or her eyebrows and make the full range of facial expressions. The degree and extent of the results of BOTOX® injections will vary from individual to individual.

Patients who undergo BOTOX® may experience a range of mild side-effects following the procedure. The majority of these will disappear within one to two days. These include dry mouth, discomfort or redness at the injection site, fatigue, and mild pain in the head or neck. However, less frequently, patients may display an allergic reaction involving rash, wheezing, and dizziness. In rare instances, it is possible for the botulinum toxin to migrate away from the injection site to other areas of the body, resulting in global muscle weakness, blurred or double vision, drooping of the eyelids or facial muscles, loss of bladder control, difficulty swallowing, speaking, or breathing, and hoarseness of the voice. A doctor should be consulted immediately if an allergic reaction or a spreading of the botulinum toxin is suspected. There have been no documented cases of the botulinum toxin spreading away from the injection site when BOTOX® has been used by a trained doctor who has administered the recommended doses.

Is BOTOX® approved for use in the U.S.?

BOTOX® has been FDA-approved since 2002 for the treatment of moderate to severe frown lines.

Is BOTOX® covered by insurance companies?

When BOTOX® is used to treat frown lines or other deep lines of the face, it is considered to be a strictly cosmetic procedure and is generally not covered by health insurance. However, BOTOX® treatments may be covered by health insurance when they are used to treat the head and neck pain associated with cervical dystonia or to alleviate excessive sweating or the symptoms of other medical conditions such as strabismus and blepharospasm.

By SkinCareGuide.com Staff
Updated: May 19th, 2010

Understanding Fine Lines and Wrinkles: Dynamic Lines
Is Dysport the New Botox?
Treatments that Triniti Can be Combined with